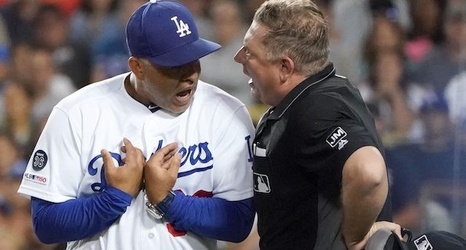 Moments after enduring an injury scare with Chris Taylor after he was hit by a pitch in the left hand, Los Angeles Dodgers manager Dave Roberts received an early exit when he was ejected by home-plate umpire Greg Gibson for arguing balls and strikes.

Roberts protested a pitch to Gavin Lux that appeared to be out of the zone but was called for strike. All in one motion, Gibson turned to the dugout, removed his mask and tossed Roberts, who came running out of the dugout.

Roberts continued to exchange words with Gibson in an animated discussion before making his way to the clubhouse.