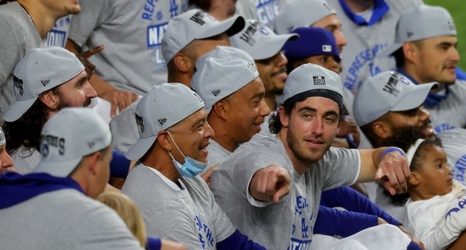 ARLINGTON, TEXAS - OCTOBER 18: Cody Bellinger #35 of the Los Angeles Dodgers poses for a photo with his team following their 4-3 victory against the Atlanta Braves in Game Seven of the National League Championship Series at Globe Life Field on October 18, 2020 in Arlington, Texas. (Photo by Ronald Martinez/Getty Images)

The Dodgers roster has a ton of playoff/World Series experience.

The Los Angeles Dodgers have won the National League and advanced to the World Series three of the past four seasons. They’ve won the NL West and made it to the NLDS for eight straight years.