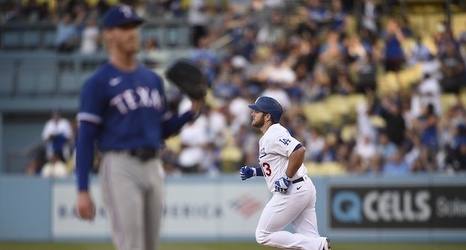 The Los Angeles Dodgers received home runs from Max Muncy, Justin Turner and Gavin Lux to storm out to a 6-0 lead against Mike Foltynewicz and the Texas Rangers in the first inning of Friday’s series opener at Dodger Stadium.

Muncy’s spot in the order nearly came up a second time, though the at-bat would have been taken by Albert Pujols. When the Dodgers took the field in the second inning, it was with Pujols taking over for Muncy at first base.

It prompted some thought that Muncy perhaps aggravated his right ankle injury or perhaps the team looked to take advantage of a big lead and get him some rest.