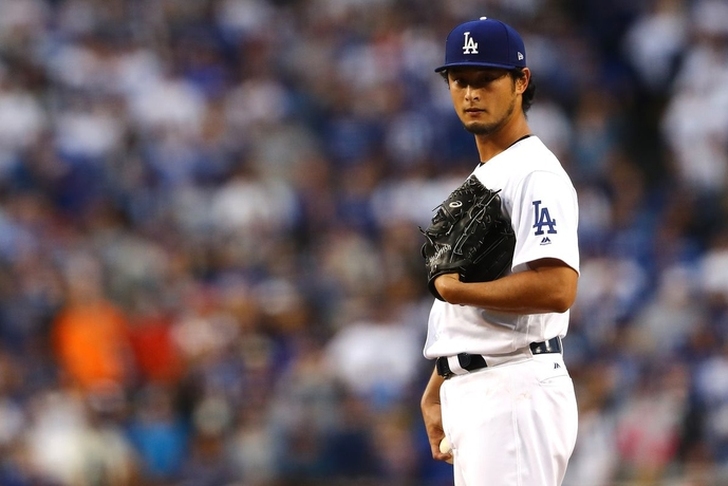 The MLB offseason has been relatively quiet to this point for the Los Angeles Dodgers. Now that Winter Meetings are underway the rumor mill is buzzing with potential signings, targets, and trades. Two of the biggest names in the sport have already switched teams with the Los Angeles Angels signing Shohei Ohtani and the New York Yankees acquiring Giancarlo Stanton in a trade with the Miami Marlins. This is leaving Dodger fans wondering if or when the team will make any big offseason moves.  Here are all the latest Dodgers news & rumors you need to know:

Will Darvish Be A Dodger in 2018?
Even though Yu Darvish had a rough World Series giving up nine runs in 3 1/3 innings in his two starts against the Astros, he is still a top free agent available. Ken Gurick of MLB.com stated that Darvish and the Dodgers have remained in touch throughout the offseason.

Zaidi said the club still is having active dialogue with Darvish, a free agent.

Darvish is 31 years old and, even though the Dodgers have a deep rotation, bringing back Darvish makes sense. He threw 186 2/3 innings with a 3.86 ERA in 2017, his first full year back from Tommy John surgery.

Christian Yelich Coming To LA?
There are still plenty of fish in the MLB sea, and since the biggest Marlin has been caught by the Yankees, its time for the Dodgers to cast their line for Christian Yelich. Howard Cole of Forbes.com writes that he'd be an excellent addition to Los Angeles.

As it stands this afternoon, Los Angeles has two big left-handed bats in their everyday lineup -- Corey Seager and Cody Bellinger. Sure, Andrew Toles may bounce back from injury and hold down the LHB part of a platoon in left, and sure, L.A. may re-sign Chase Utley for some reps at second base; and yes, Yasmani Grandal may stick with the club in some sort of split-time catching assignment with Austin Barnes. But those are big "ifs," and a third accomplished lefty stick in the lineup is key to a balanced roster.

Dodgers Dodge Bullet
With the latest news surrounding Shohei Ohtani, the Dodgers may have caught their first break of the offseason. According to Jeff Passan of Yahoo Sports, reports are coming out that Ohtani has a damaged ulnar collateral ligament in his pitching elbow.

The injury is minor considering it is only a first-degree sprain, which is the least severe of the UCL injuries, but this injury could lead to Tommy John surgery.

The Dodgers may have avoided a salary cap nightmare if this injury turns out to be as severe as it indicates. The Angels committed over $2.3 million in signing bonus along with the $20 million in international posting fee which is a lot of money to invest in a player who is showing early signs of UCL injuries.