The Clippers are once again on an upswing 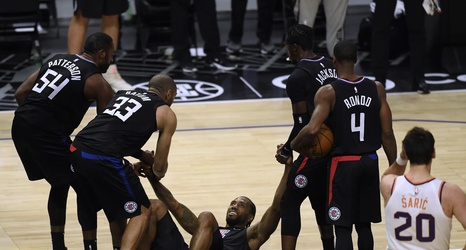 The Clippers used an undefeated week — despite three different starting lineups — to vault back up in the power rankings. Unfortunately, the group that earned the two most impressive of those wins won’t be available probably for the rest of the regular season due to Patrick Beverley’s hand injury.

The first choice group for the final 17 games will therefore be Reggie Jackson, Paul George, Kawhi Leonard, Marcus Morris Sr., and Ivica Zubac, which is the team’s second-most used lineup to date. They’ve played 121 minutes together and have been outstanding on offense while struggling a bit on the other end, likely missing Beverley’s presence at the point of attack, for an overall net rating of plus-8.