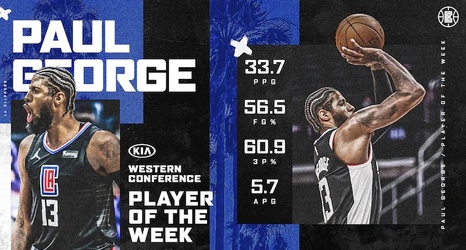 The NBA today announced that LA Clippers forward Paul George has been named Western Conference Player of the Week for games played from Monday, April 5 through Sunday, April 11. This is George’s ninth career Player of the Week Award, his first since February 11, 2019. During the week, George averaged 33.7 points and 5.7 assists while shooting 60.9 perfect from beyond the arc.

The Palmdale, Calif., native has scored 30+ points in three-straight contests while helping lead the Clippers to a five-game winning streak, the longest active streak in the NBA. Against the Phoenix Suns on April 8, George became the first player in franchise history to have at least 30 points and six three-pointers made in consecutive games.