LA Clippers: Why the starting lineup should stay as is into the playoffs 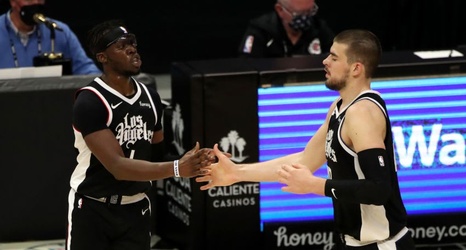 LOS ANGELES, CALIFORNIA - APRIL 09: Reggie Jackson #1 of the Los Angeles Clippers celebrates with Ivica Zubac #40 after making a three point basket against the Houston Rockets during the fourth quarter at Staples Center on April 09, 2021 in Los Angeles, California. NOTE TO USER: User expressly acknowledges and agrees that, by downloading and or using this photograph, User is consenting to the terms and conditions of the Getty Images License Agreement. (Photo by Katelyn Mulcahy/Getty Images)

The LA Clippers are in the midst of the longest active win streak in the NBA at five games.