Clippers vs. Pistons preview: Nice to see you again! 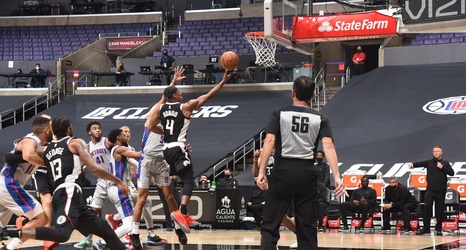 The Clippers’ next opponent will look very familiar, and that’s not because there are so many Pistons on L.A.’s roster that Dwane Casey called them “Detroit West”. Three days after facing off in Los Angeles, the Clippers and Pistons are meeting up again in the Motor City.

The main difference this time? Availability.

Paul George hasn’t played both nights of a back-to-back in a month, and that came when he had only played 23 minutes in the first game. George logged 38 minutes last night, so an encore seems unrealistic, though Kawhi Leonard could return to spell his superstar comrade since he did make the trip with the team.