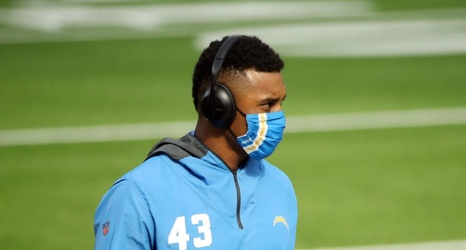 INGLEWOOD, CALIFORNIA - NOVEMBER 22: Michael Davis #43 of the Los Angeles Chargers looks on during warm ups before the game against the New York Jets at SoFi Stadium on November 22, 2020 in Inglewood, California. (Photo by Katelyn Mulcahy/Getty Images)

The LA Chargers released veteran cornerback Casey Hayward over the weekend and freed up $9.75 million in cap space for the 2021 season. This was expected, as Hayward’s dead cap hit was noticeably small and the former Pro Bowl cornerback was not himself in 2021.

In fact, Hayward was quite poor. The best game to go back and watch to highlight this truth was against the New York Jets, where a rookie receiver in Denzel Mims made Hayward look like a rookie, not a veteran.