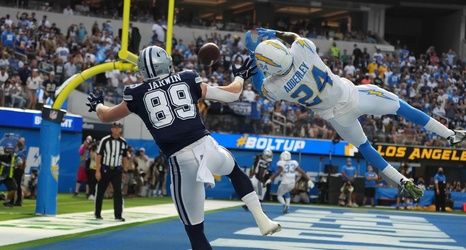 The Los Angeles Chargers lost their home opener, and first game in their new home in front of fans, to the Dallas Cowboys yesterday. So, lets take a look at who was on the field to contribute in the losing effort.

All 5 of the offensive line starters fort he Los Angeles Chargers this week played 100% of the snaps. The continuity there is nice, but the level of play from Storm Norton specifically leaves a lot to be desired.

At RB the snaps shifted slightly heavier towards Austin Ekeler this week, 63% vs 58% last week, and we also saw Justin Jackson and Larry Rountree flip the RB2 and RB3 workload, with Justin Jackson receiving RB2 snaps this week

After Jerry Tillery played 76% of the snaps last week, which we all thought was too much, he was on the field for 85% of the game yesterday.