LA Chargers second-year players: Nothing lose and a lot to gain 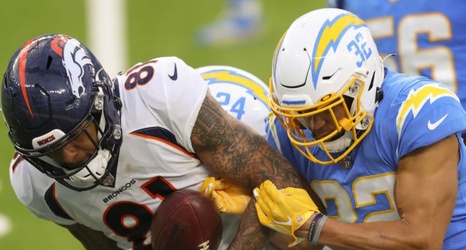 INGLEWOOD, CALIFORNIA - DECEMBER 27: Tim Patrick #81 of the Denver Broncos is tackled by Nasir Adderley #24 and Alohi Gilman #32 of the Los Angeles Chargers at SoFi Stadium on December 27, 2020 in Inglewood, California. (Photo by Joe Scarnici/Getty Images)

You don’t have to be a fan of the LA Chargers to know the ultimate NFL bust was quarterback Ryan Leaf. From the get-go, there were problems with the 1998 first-round draft pick. There were no wait-to-see-what-he-does-in-year-two projections for the signal-caller from Washington State. It was not good.

As the years have gone by, the advent of analytics in the league has helped teams dramatically understand the potentiality and possible future of the player they are spending millions on getting them to the promised land.