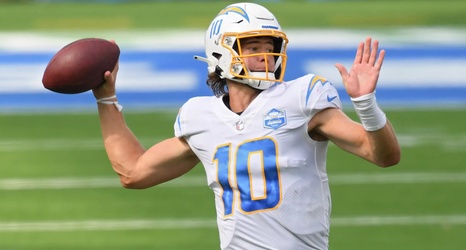 Following a surprise debut where he was named the starter just minutes before the opening kickoff, Chargers rookie quarterback Justin Herbert was named the NFL’s Rookie of the Week after throwing for 311 yards and scoring two touchdowns against the Kansas City Chiefs in Week 2.

In a week where 2020 No. 1 overall pick Joe Burrow threw over 60 passes in a near win over the Cleveland Browns, Burrow’s narrow loss to the reigning Super Bowl Champs got the nod.

The Herbert hype got started during the very first drive when Herbert orchestrated an electric eight-play, 79-yard drive which he capped with a four yard scramble for his first NFL touchdown.