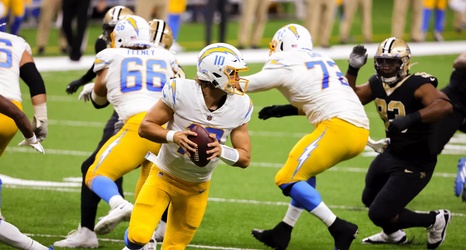 An instant review of the Los Angeles Chargers‘ loss at the New Orleans Saints on Monday night:

Wow: The Chargers lost in overtime. They became the first NFL team in 17 years to blow 17-point leads in consecutive years. They are 1-4.

Wow II: Michael Badgley hit the uprights on a 50-yard field goal in the final seconds to send the game to overtime.

Wow III: The Chargers thought they saved themselves when rookie quarterback Justin Hebert hit receiver Mike Williams for a 64-yard touchdown pass (his fourth of the game) late in the game on third down and 10 to give the Chargers a 27-20 lead and their first points of the second half.