Eli Manning: “I was just worried about the Chargers organization.” 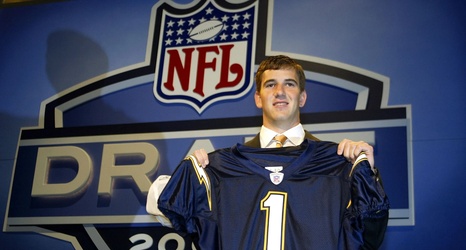 Over 17 years ago, Eli Manning was selected by the San Diego Chargers with the first-overall pick in the 2004 NFL draft. Before the opening day was done, Manning forced the Chargers’ hand by deciding he would not play for the team that drafted him and was subsequently traded to the Giants for Philip Rivers and three draft picks.

The rest is obviously history.

However, despite that day having been so long ago, we still hadn’t really received a straight-forward answer straight from the horse’s mouth...until now.

On a recent episode of Kyle Brandt’s “10 Questions with Kyle Brandt” podcast, the Good Morning Football host was joined by Manning and, of course, they couldn’t avoid one of the most-infamous moments in NFL draft history.