Chargers: Is this how Philip Rivers ends his career? 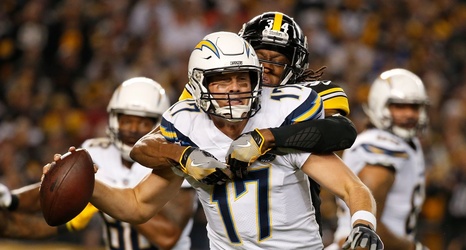 The Chargers have been fortunate to employ a tough quarterback with a quick release, but it’s becoming increasingly apparent their unwillingness to properly address the offensive line is now dooming Philip Rivers.

Yes, No. 17 is the one pulling the trigger. When Rivers tosses an interception, it was his decision to attempt that throw. At the end of Sunday’s game against the Steelers, Rivers chucked the ball up and hoped for Mike Williams to come up with a reception. Instead, it was picked off.

But those poor decisions stem from a failure to protect him. How does any quarterback respond, particularly a non-mobile one, when both offensive tackles are getting bullied every single rep?