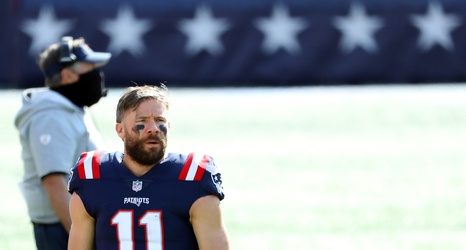 FOXBOROUGH, MASSACHUSETTS - JANUARY 13: Julian Edelman #11 of the New England Patriots runs the ball during the second quarter in the AFC Divisional Playoff Game against the Los Angeles Chargers at Gillette Stadium on January 13, 2019 in Foxborough, Massachusetts. (Photo by Adam Glanzman/Getty Images)

The Julian Edelman Hall of Fame debate has been a hot topic among NFL circles. Edelman was released by the New England Patriots, which appeared to be a formality for Edelman’s retirement. However, I would not be shocked if we see Edelman sign with the Tampa Bay Buccaneers at some point during the season simply to add depth and another ring to his trophy case.