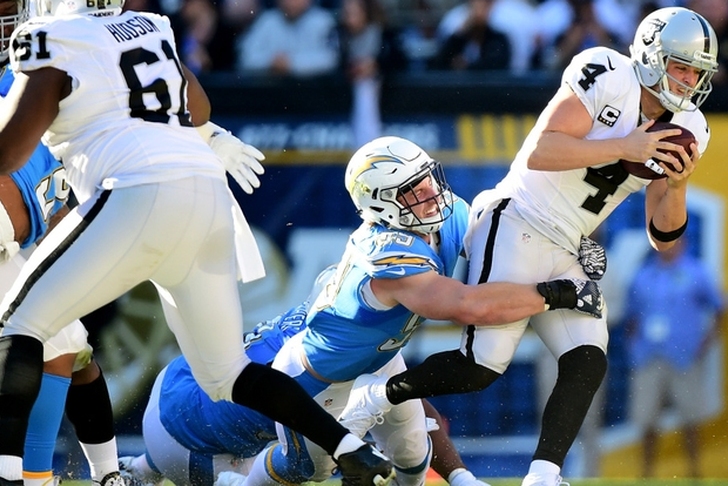 The Los Angeles Chargers are 8-7, sitting in the seventh seed in the AFC playoff hunt. Only six teams make the playoffs from the AFC, but they still have a chance to sneak in. After starting the season 0-4, the Chargers won eight of their last eleven games playing balanced football on offense and defense. The Chargers are coming off a 14-7 win over the New York Jets, but need some help to get into the playoffs.

Here's what needs to happen for the Chargers to make the playoffs.

1. Chargers Win + Titans Loss Or Tie + Bills Loss Or Tie
The Chargers will need some help getting into the playoffs, but they need to win to give themselves at least a chance. With a win on Sunday over the Oakland Raiders, the Chargers will then need the Tennessee Titans and Buffalo Bills both to lose or tie.  The Titans play the Jacksonville Jaguars at home on Sunday and earlier in the season the Titans beat the Jaguars on the road 37-16. The Bills are also on the road against the Miami Dolphins this week and in Week 15 the Bills beat the Dolphins 24-16.

2. Chargers Win + Titans Loss Or Tie + Ravens Win Or Tie
The second scenario may be the most likely out of the three. The Titans have lost three straight games and play an angry Jaguars team coming off a tough loss. So it wouldn't be surprising to see the Jaguars beat or at least tie with the Titans. The Baltimore Ravens have won two straight games and play the Cincinnati Bengals at home in Week 17. The Ravens beat the Bengals 20-0 earlier in the season, forcing five turnovers and sacking quarterback Andy Dalton five times.

3. Chargers Tie + Titans Loss + Bills Loss Or Tie
The last time a Chargers game ended in a tie was in 1973, but if they tie this week it will be time for them to cross their fingers and hope for a Titans loss and Bills lose or tie. In this scenario, if the Titans were to also tie, Tennesee would make the playoffs over the Chargers because of the NFL tiebreaker rules. The Chargers would also need a Bills lose or tie, which isn't too hard to imagine since four of the six Dolphins wins this season have come in Miami.

According to the NY Times N.F.L. Playoff Simulator, the Chargers have a 27 percent chance of making the playoffs.

Follow our Los Angeles Chargers Rumors page for all the latest Chargers rumors!