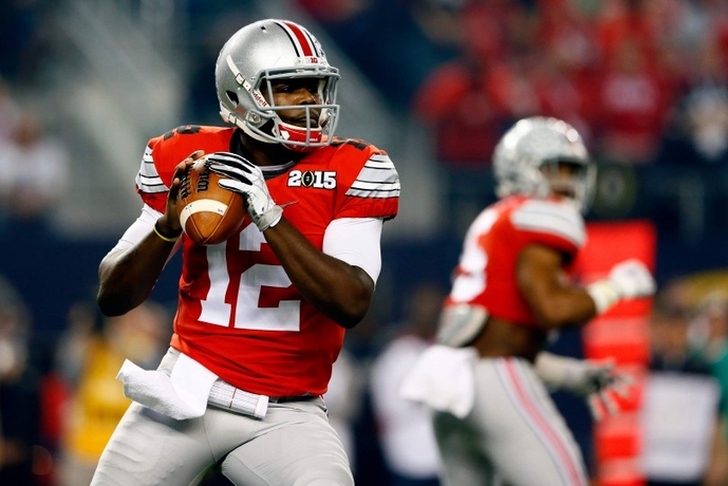 NFL Free Agency is officially here, and the next few days will feature several San Diego Chargers rumors. The Chargers have already made several big moves and might not be done yet. With that in mind, here are a few of the more interesting rumors and news tidbits on the Chargers.

San Diego interested in Ohio State QB Cardale Jones?
The Chargers had five members of their coaching staff at Ohio State's Pro Day this last week, and most of their focus was on defensive end Joey Bosa, who many think they could take with the No. 3 overall pick in the draft. However, there is someone else they are very interested in - quarterback Cardale Jones.

According to WBNS-FM The Fan in Columbus, San Diego met with Jones for two hours after the workout. Jones was the only prospect the Chargers met with for that long, showing that they have a very high level of interest in him.

Jones has top-tier arm strength and excellent size at 6'5" and 255 lbs, but is inconsistent with his accuracy and his reads. Many think he's a high-upside project, and San Diego thinks of him as someone that can sit behind Philip Rivers for a few years before taking over the starting job when he retires. Jones is projected to be a fourth or fifth round pick in the draft.

Jones started the season as Ohio State's starting quarterback after leading them to the national championship two years ago, but was benched in favor of J.T. Barrett halfway through the season. He passed for 1,460 yards, eight touchdowns, and five interceptions in 10 appearances last season.

Chargers sign DT Damian Square to one-year deal
San Diego has re-signed defensive tackle Damian Square to a one-year deal, the team announced. Square was claimed off waivers by the Chargers after he was cut by the Chiefs in 2014, but did not make San Diego's active roster until the second half of the 2015 season.