Browns vs. Chargers: 3 Things We Learned From Each Team 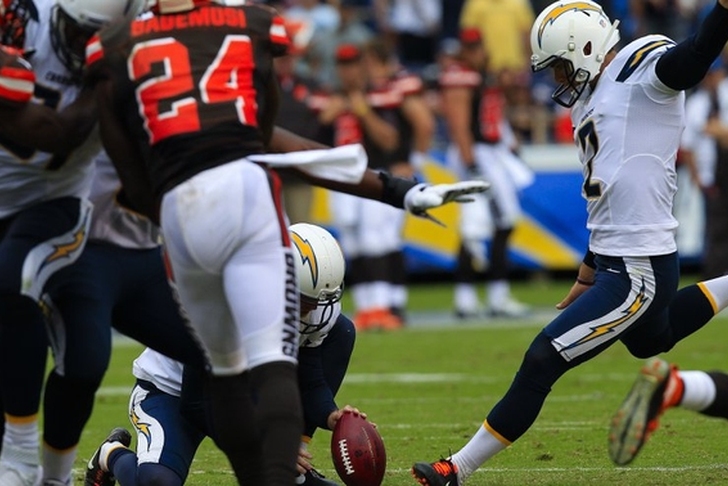 The San Diego Chargers barely beat the Cleveland Browns, 30-27, in a game decided by a last-second field. The Chargers missed the first field goal, but an offside flag gave the Chargers a second chance and they capitalized. The Browns fall to 1-3, while the Chargers are now 2-2. Here are three things we learned from each team in the Chargers' win.

Classic Browns. I'm sorry Cleveland. You're a loyal fan base who deserves better. That ending is just classic Cleveland. Some things never change, and it looks like the Browns are the same old Browns.

Duke Johnson is a weapon. Johnson had only eight carries for 31 yards, but that's not where he did his damage against the Chargers. Johnson had nine catches for 85 yards and a score. The Browns have few weapons on offense and Johnson looked the best passing option for Josh McCown this week.

Running game must do better. This is something we probably already knew, but 21 carries for 100 yards isn't quite enough. It's better than it's been recently, but the Browns also threw the ball 41 times. That's not balance. If the Browns want to have more offensive success, they need to run the ball better. Perhaps Johnson can get more carries next week.

Who Dontrelle Inman is. Inman played in two games late last year, catching 12 passes. He had a cameo in today's game, catching three passes for 88 yards. If Malcom Floyd misses major time with a concussion, perhaps Inman can step up.

Philip Rivers will carry this team. Perhaps we already knew this one, but with a struggling running game, the Chargers will go as far as Rivers can carry them. He's played pretty well this season and will need to keep playing well for the Chargers to make a postseason run.

The pass defense must improve. Look, the Chargers really should have needed overtime in this one. A win is great, but there are a lot of issues the team needs to fix. The biggest is their pass defense. McCown and the Browns should not complete 32 of 41 passes for 356 yards and two TDs. The Chargers need to fix their pass defense, or better offenses are going to torch them and win.