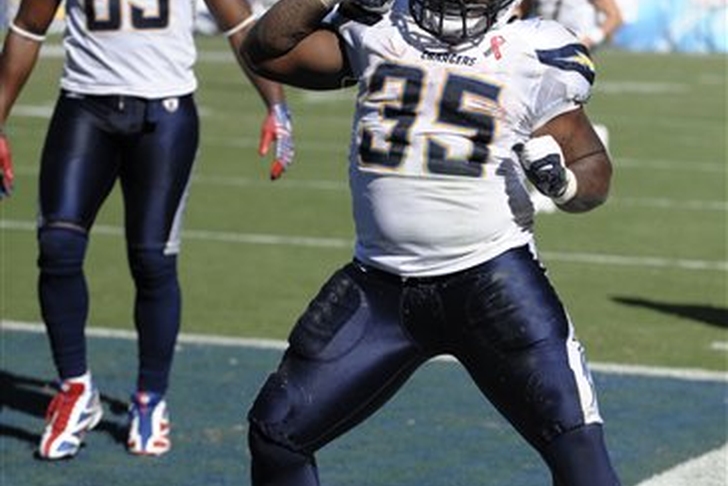 O hey, you’re back! Well, welcome one and all to Chat Chargers, the one and only venue on the web where you can get high-quality babble on your favorite under-performing team from me! You’ve clearly made the right choice.

But I digress. On with the show, right?

A few days ago, I started the free agency showdown series with a look at the upcoming battle between AJ Smith and troubled wide receiver Vincent Jackson, which I’m sure you all thoroughly enjoyed. Now that that’s behind us though, I figured we should just move top-down as far as importance goes with off-season issues, putting Mike Tolbert (in my opinion) next on the list.

I hope you all know Mike Tolbert. At 5-9, 245 pounds, he has been affectionately dubbed by many (or at least by me) as the human bowling ball. He is, without a doubt in my mind, the most enjoyable-to-watch player on the San Diego Chargers.

If you disagree, just focus on the ‘in my mind part’.

Tolbert seems to throw fans back to the mid-2000s, a time when the power running game was the bread-and-butter of a Marty Schottenheimer-led San Diego team who bulldozed teams with the likes of Lorenzo Neal and a vicious offensive line. While the framework that operates around Tolbert isn’t the same, he runs with such brutally physical style, and he puts so much effort into his play that you can’t help but love the kid.

The Chargers staff clearly must be watching different film then, because Tolbert is set to enter the free agency market and there really is no indication that San Diego has or intends to offer the round mound of touchdown a new, long-term contract. Considering that, I have one question for  the Chargers:

It kills me to watch the upper management make bad decision after bad decision, but a lot of the missteps made in the last few years have been fairly easy to recover from.

This though? This would kill the team in more than one way.

There’s the obvious way, in that losing Mike Tolbert would create a fairly significant talent void on the team. As a runner, Tolbert offers a great change of pace to Ryan Mathews, as well as a great short-yardage and goal line option. That’s his ‘visual’ impact, which should be enough in and of itself to merit consideration.

We can’t forget, though, that Tolbert is also the team’s reigning special teams player of the year, having turned in what can only be described as a dominant performance on the kickoff coverage team. Considering how abysmal San Diego was on special teams only two years ago, it’s important that the team not let this become another Kassim Osgood kind of situation.

The least apparent, but most important, impact that Tolbert has on the team though is locker room presence. While I have never heard much about him taking players under his wing or rallying the troops when someone needs to step up, it is clear to me that Mike Tolbert is one of the hardest workers on the team, and that really comes through in his play. That kind of work ethic can never be undervalued, because it’s something that can rub off on the team and positively affect the way the rest of the team operates.

So now we come to the conflict: the salary cap. To be sure, the Chargers have plenty of cap space, but ultimately they are questioning whether it is worth it to pay Tolbert a starter salary for a year’s worth of backing up Ryan Mathews and special teams play. I have no clue as to what the asking price for Tolbert is right now, or what it will be in the free agency market, but it should be safe to assume that, given what he offers a team, he could garner anything from $1.5-3.5 million a year, depending on what role he projects to.

To my mind, that’s a perfectly reasonable price to pay.

Consider this my plee (and hopefully yours as well, should you be convinced by what you have read) to the Chargers’ organization: Make the call and offer Mike Tolbert whatever he wants. He is one of San Diego’s most valuable assets, and the fans love him. Losing Tolbert is only going to send more fans up north into Raiders or 49ers fandom, and good luck selling out games when that happens.

Well, that’s about all I have for you folks this week. Join me again on Monday, when I jump into free agency battle no. 3 – the San Diego Chargers vs Talent. Until then, you know the drill: If you enjoyed the article, please post it on your facebook, tweet it, e-mail it to friends, co-workers, countrymen, etc., it would be very much appreciated. If you’d like to hear from me over the weekend, follow Chat Chargers on Twitter (@ChatChargers), where I will be live-tweeting the NFC and AFC Championships. Enjoy a great weekend of football, and I will see you all on the other side. Peace.