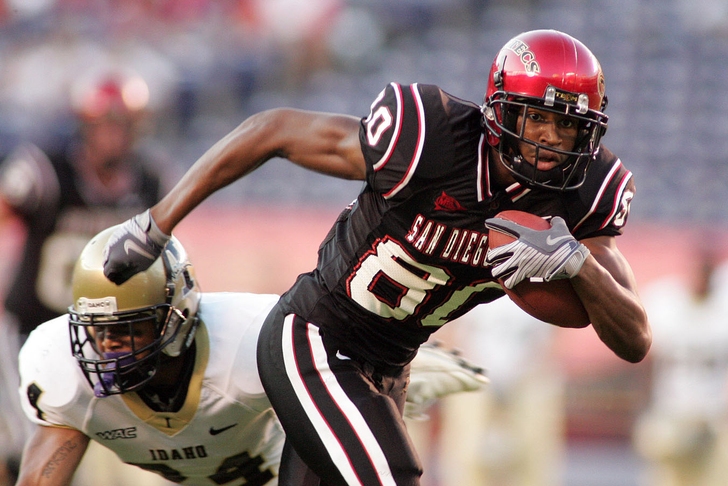 Coming into the draft, I thought that a lot of analysts were overvaluing the importance of picking a wide receiver for the San Diego Chargers. I get where the fear is coming from: Vincent Jackson is franchised tagged and may not last the year, Malcom Floyd is a free agent, Buster Davis is probably on his way out and Legedu Naanee is almost certainly out after his latest...'indiscretion' (if you're not sure what I'm talking about, check this out).

To me, though, putting wide receiver at the top of the list would be nothing but reactionary management. In all likelihood, Jackson and Floyd will remain (at least for the 2011-2012 season), and with young players like Seyi Ajirotutu and veterans like Patrick Crayton, a high round wide receiver should've been out of the question, considering that getting a  sure-thing at wide receiver in this draft would've taken a move up to the top 10 (yes, I really only think that A.J. Green and Julio Jones are sure-things).

In spite of all that, though, San Diego did an excellent job with this pick.

After addressing top priorities on defense with the first three picks, the Chargers managed to pull a player with real future potential in Vincent Brown.

After an up-and-down off-season, most draft analysts seemed to settle on a slightly above average rating for the SDSU standout, and for good reason: He elevates well, he moves well out in space, and he has above average hands. At 5-11, 187 lbs., Brown will likely play the slot (replacing Legedu Naanee).

There are a couple of curiosities about Brown that make me wonder why he was ultimately the Chargers' pick. For one, he doesn't fit the physical profile of a standard A.J. Smith-era Chargers wide receiver (I'm discounting guys like Carlos Polk and Chris Chambers, sorry folks). The lineup of passing targets last year was affectionately referred to as a basketball team by a number of people, and for good reason: the average height of a San Diego wide receiver was somewhere between 6'3" and 6'4".

The second curiosity is his speed. The Chargers have not been known in recent times as a team with a soft spot for burners on the edge, but a 4.71 40-yard dash does not bode well for Brown. It means that, at the professional level, he will struggle to create distance between him and his defenders, if he can create any at all.

I understand the pulls: great hands, great moves, great ball skills and native roots all make him a good selection. I couldn't help but wonder, though, whether Jerrel Jernigan would've been a better choice, especially considering the fact that both Jernigan and Brown would project as slot guys for the Chargers.

If it were me, I would've looked at Jernigan or Mason Foster in this situation, but, all things considered, Vincent Brown will serve the Chargers well, and at No. 82, he comes at decent value.

Join me on Sunday for a breakdown of Shareece Wright, the San Diego Chargers' fifth pick in the 2011 NFL Draft.