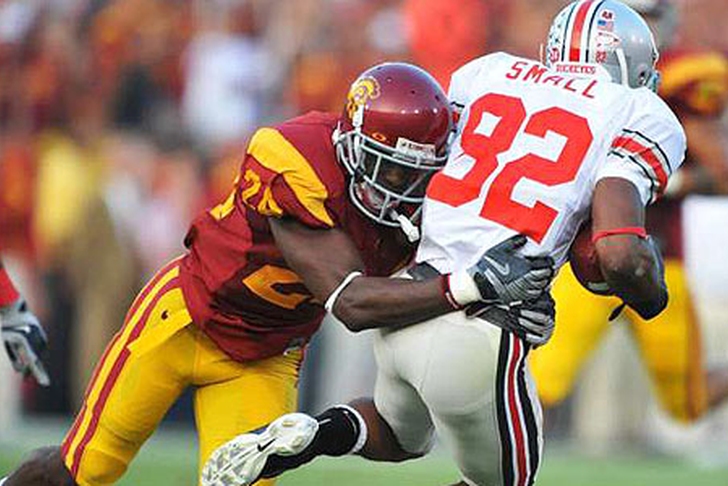 With the No. 89 overall pick in the 2011 NFL Draft, the San Diego Chargers select…

Considering that the video hit over 1.5 million views on YouTube, many of you have probably seen this fantastic video of Shareece Wright being flattened by Stanford quarterback Andrew Luck while returning a fumbled ball.

I had that image imprinted in my mind all the way through the draft, which is why I shook my head and laughed when I saw him come off the board at No. 89. I couldn’t help but imagine him returning a kick or an interception, only to get laid out down the field and cough up the rock.

After actually watching some tape on this kid, I still feel like I wasn’t totally off the mark. Wright has a tendency to get tunnel vision and focus too much on the ball, he lacks the top end speed to keep up with high-caliber wide receivers on the outside, and his injury history leaves brings up some question marks right off the bat.

At the same time, though, there are some things to like about Shareece Wright. For one, he has a penchant for getting after the ball. He may not have created an incredible number of turnovers in college, but it’s clear that he has good awareness on the field and knows how to work his way towards the ball.

Wright also has a good combination of size and speed. At 5-11, 185 lbs., with a 4.46 second 40-yard dash, which means that he will have no trouble covering a good number of receivers in the League, especially if the Chargers put him in the nickel position to cover the slot.

In my personal opinion, Wright was not the best pick at this position. At No.89, teams should still be looking for a player with some immediate impact, and I just don’t see that in Shareece Wright. At best, Wright will play the nickel position and/or special teams, and while San Diego could use that kind of player, there were players still left on the board that had higher upsides and a higher likelihood of immediate impact (take Brandon Burton, CB,

[caption id="attachment_77" align="alignleft" width="256" caption="With players like Brandon Burton still on the board, the Shareece Wright pick looks more like a safe pick than a high-potential pick"]

Utah as an example).

All things considered, expect to see relatively little out of Wright in his first year or two, and for that, this pick earns a B/B-, simply because of the lack of immediate impact value in comparison to other potential picks.