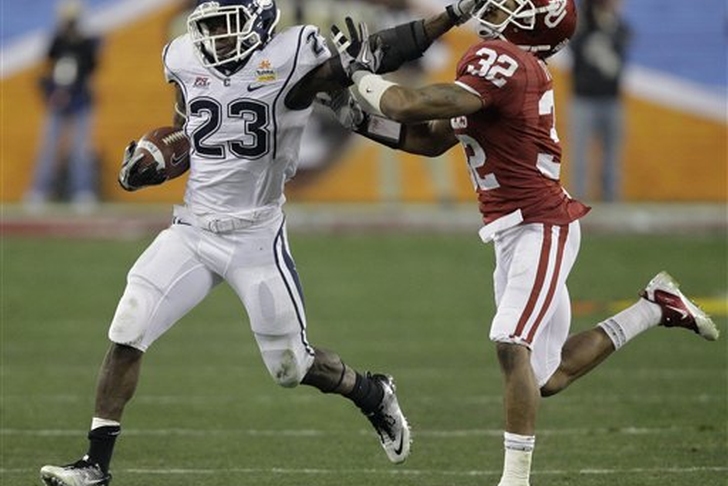 I'll be the first one to admit that I didn't do the kind of scouting that I usually do for the draft this year. Sure, I watched some tape and looked at way too many outside scouting reports and mock drafts for my own good, but that can only get you so far.

In spite of that, though, I still had my underdogs list ready. I'm sure you're all familiar with that list, that group of players that you've seen during the year that no one ever talks about, but that you are sure will succeed in the NFL.

Admittedly, he wasn't playing against the greatest of competition at the University of Connecticut, since the Big East isn't currently what comes to mind when anyone thinks about great college football. It's only fair, then, that a high-caliber running back would average 4.0-5.0 yards per carry against that competition.

Todman's lowest season average was 5.1 yards per carry. Only three teams held Todman under 4.8 yards per carry: Louisville (19 carries, 82 yards, 4.2 ypc), USF (33 carries, 93 yards, 2.8 ypc) and Oklahoma (32 carries, 121 yards, 3.8 ypc). While these numbers don't quite speak to sterling consistency, it's at least admirable that he was nearing 100 yards in each of those games, an impressive feat when you consider UConn's lack of a solid passing attack.

Todman's UConn career also proved both his ability to take on an NFL level work load, as well as his ability to play a role in the return game. Not only did Todman average nearly 28 carries per game in his senior season, but he also averaged 27.5 yards per return on two kicks (though his most impressive special teams work came in his junior season, when he posted 506 yards on 20 returns with 1 TD).

Add that to his combine performance (which includes a blazing 4.4 40 yard dash time, an incredible 38.0 inch vertical and 25 reps on the bench press), and it would seem that the San Diego Chargers have found themselves a 5'9", 203 lb. replacement for the likely-to-depart Darren Sproles.

[caption id="attachment_131" align="alignleft" width="300" caption="While Jordan Todman did have success in college, he'll need some adjustment time in the NFL"]

While Todman will certainly require some adjustment to professional-level competition, he has all of the tools he needs to succeed (outside of a veteran mentor, which could potentially become a problem, but only time will tell). At pick no. 183, Todman is a steal in my mind, and should provide the Chargers with everything they need to complete both their backfield (a committee that will likely look something like: 1. Ryan Mathews 2. Jordan Todman 3. Mike Tolbert/Jacob Hester/Curtis Brinkley) and their return game, which has lacked an impact player for the last year or so (I suppose it was only a matter of time before teams started to figure out Darren Sproles).

For me, this pick is an easy A. However, out of a sense of objectivity, I'm going to give this one a B+. There's a lot of value in this pick, especially if Todman turns out to be the kind of impact player that I think he will be.

Join me next week as I offer up a roundtable discussion about potential free agent moves, schedule difficulties, and all things Charger-related as we approach the (potential) beginning of the season.