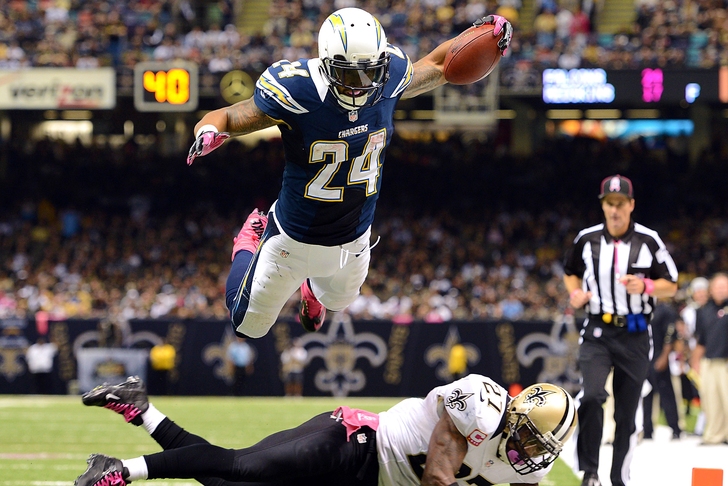 Can't get enough Chargers rumors and news? Be sure to download our 5-star iPhone app today!

The San Diego Chargers' loss to the Kansas City Chiefs on Sunday was tough in and of itself, but the real ramifications of that loss are still unknown. Injuries have piled up for the Chargers and they've still held themselves together as one of the AFC's elite.

In this Chargers Rumors Roundup, we'll look at two key injuries and how they will affect the team going forward. We'll also look at the Chargers' huge AFC West showdown with the Broncos this coming Thursday.

Ryan Mathews On The Way Back?

San Diego Chargers running back Ryan Mathews has missed the past five games with a sprained MCL. With Mathews not yet progressing to running in his rehab regimen, he is likely to miss his sixth-straight game on Thursday night.

San Diego plays Miami in Week 9 (another unlikely return scenario at this juncture) before heading into their bye. It might be wise to circle Week 11 as the most logical return day for the dynamic halfback, providing no setbacks occur.

Here's U-T San Diego's Michael Gehlken with the latest update on Flowers' status after being taken out of Sunday's Chiefs game:

[Flowers] suffered a concussion against the Chiefs, the injury apparently coming on a collision with running back Jamaal Charles during a second-quarter touchdown run. Flowers played part of the next defensive series before sitting out the rest of the game. He very well could be sidelined Thursday versus the Broncos.

There are a multitude of NFL concussion protocols that Flowers will have to pass before he's cleared to return. Flowers was initially cleared to return the game after colliding with Charles, but was quickly taken out.

"...If they say the player can go back out there, the player goes back out. ... After further evaluation, he came out of the game," head coach Mike McCoy said, via Gehlken's report.

If the San Diego Chargers can upend the Broncos in Denver, the rewards will be twofold.

Firstly, the 5-2 Chargers would take sole possession of first place ahead of the 5-1 Broncos. Secondly, San Diego will have broken serve in the team's season series. Add in a win over Peyton Manning and company at home in mid-December, and the AFC West could very well hinge on Sunday's matchup.

Pull this win off with injuries mounting all over the place and Mike McCoy's boys can look at the first half of their season with a proud eye.