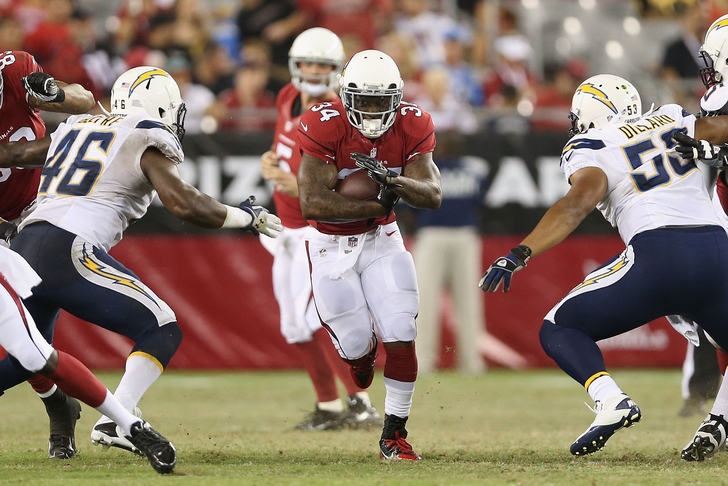 In what had the promise of a Wild West shootout of epic proportions, Carson Palmer and the high-powered Arizona Cardinals hosted Philip Rivers and the San Diego Chargers in the final game of this year's Week 1 slate.

Attempting to build off an impressive seasons in 2013, both the Cardinals and Chargers look to take the next step from contenders to champions.

Both Palmer and Rivers came out firing to open the proceedings, but each team's defense was up to the task in the first six minutes. One first down apiece would be all the two vaunted attacks would muster as underrated defensive units on both sides strutted their stuff.

The relative quiet would not last, however, as Carson Palmer provided the first big punch of the game - hitting streaking WR Michael Floyd for a 63-yard connection to set the Cardinals up in San Diego territory.

The Chargers would throw a momentum-turning counterpunch after a San Diego challenge overturned a fumble recovery by Arizona and, via a heads-up pick-up by LB Donald Butler, handed the ball back to Rivers and the offense.

Picking up where he left off after his renaissance 2013 campaign, Rivers would five of his first seven passes to four different receivers. However, the Cardinals' secondary would bend but not break in the first 11 minutes - turning the Chargers back before they could put together a legitimate scoring opportunity.

In what was ultimately a tit-for-tat first quarter between the two West Coast NFL staples, neither team would be able to establish anything resembling a lasting threat. Both teams' rushing attacks were virtually nonexistant (SD: 8 yards on 6 carries, ARI: 12 yards on 6 carries), turning the game into an (albeit entertaining) scoreless struggle for field position.

Despite hitting on just 40% of his throws (4-for-10) in the opening frame, Carson Palmer still produced over 100 yards passing when he did find a receiver's hands. That production would only increase at the start of the second quarter

Keyed by a 29-yard strike to Michael Floyd and a questionable roughing-the-passer penalty, Palmer would lead Arizona into position for their first score of 2014 - a 22-yard chip shot field goal for rookie Cardinals kicker Chandler Catanzaro.

Rivers went a respectable 5-for-9 for 46 yards in his first quarter of 2014, but was left at the mercy of a zeroed-in Cardinals secondary due to the team's lackluster rushing attack. That trend would continue on the team's first drive of the second quarter with RB Ryan Mathews and RB Donald Brown combining for a worrying -3 yards on two carries during a brief six-play drive.

Despite those struggles, San Diego's attack would be given a huge opportunity after Arizona's next possession, as a thunderous blocked punt by the Bolts' Jeremiah Attaochu gave the Chargers a short field to work with mid-way through the second quarter.

San Diego would fail to fully capitalize, but would still tie the game on a 36-yard Nick Novak field goal.

With the contest tied at 3, Arizona's frustrations on third down (1-for-6 in the first half) continued to haunt them. Their fifth failed conversion would force them to punt it back to the Chargers with just over three minutes left in the first half.

With just three total first downs in the firs 27 minutes, the San Diego offense finally found some daylight on their final first-half possession.

Using swing passes in the flat and his legs (on an impressive 10-yard scramble), Rivers would lead the Chargers 44 yards to the Arizona 36. However, WR Eddie Royal wouldn't run out a crossing route on the next play, leading to a interception by Arizona CB Jerraud Powers.

A visibly-upset Rivers would watch Carson Palmer hit Ted Ginn on a huge pass to the Chargers 26. Chandler Catanzaro would hit a 44-yard field goal with time expiring to give the Cardinals a 6-3 lead at the half.

Cardinals' Player of the Half: WR Michael Floyd (3 catches, 94 yards)

Chargers' Player of the Half: OLB Jeremiah Attaochu (blocked punt)