5 Players The Chargers Could Sign To Replace Keenan Allen 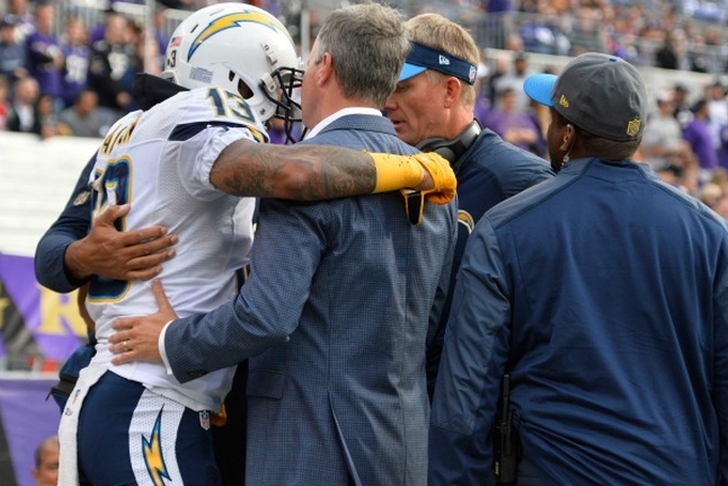 The loss of Keenan Allen is a big blow to the San Diego Chargers. Allen was placed on injured reserve after undergoing a kidney procedure. It's a tough loss for the Chargers, as Allen was having a monster season.

The Chargers' top two WRs are now Malcom Floyd and Stevie Johnson. Also on the roster are Dontrelle Inman and Javontee Herndon. Inman has nine catches this season, while Herndon was just promoted to the active roster. Jacoby Jones was also on the roster, but the team cut him Tuesday. That leaves the Chargers with just four active WRs, and it's highly unlikely they carry so few. With that in mind, here are five players the Chargers could sign to replace Keenan Allen.

The Chargers are 2-6, so why not take a chance on Pryor? He's still learning how to play the position after a failed stint as a quarterback, but he has the raw athleticism to morph into a big play threat with the right coaching behind him. He's not going to provide the impact of Allen, but nobody on this list can do that. At the very least, he's worth a tryout. Moss still has the itch to play. Yes, he's 38 years old, but Moss is a freak athlete who can still play in the NFL at his age. Moss worked out with the Saints' Brandin Cooks, and Cooks believes Moss can still compete at a high level. The Chargers will miss Allen in the red zone, a role Moss can help fill. It would probably cause a bit of a media circus, but he's at least worth kicking the tires on.

Williams was on the active roster earlier this season, and is currently on the practice squad. He was cut because of depth issues elsewhere, but he made the 53-man roster for a reason. With the new injuries, it makes perfect sense for Williams to return to the active roster. Williams is the most likely player to be added, but there are two bigger names on the market.

One of the biggest names still available in free agency right now, Nicks has battled injuries in recent seasons. He was great for the New York Giants early in his career, before undergoing the same surgery foot surgery Cowboys WR Dez Bryant recently had. Nicks hasn't been the same player since, bouncing between the Giants, Colts and Titans to little or no effect. Still, Nicks has the potential to be a starter, something that can't be said for most of the current free agents.

Had Wayne decided that playing for the New England Patriots was fun, he likely would have made the roster. He still has talent, and the Chargers could fit his desire to play for a contender, even if San Diego is 2-6. With Allen out, Wayne would be a perfect fit for the Chargers. Of course, that's dependent on him wanting to play.