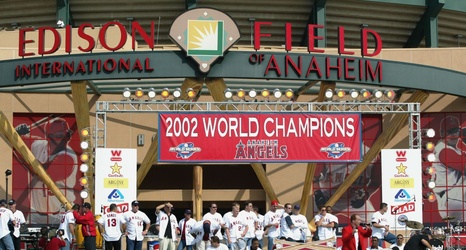 Once the Anaheim Angels got into the playoffs, the magic continued and three weeks later the most famous call by an Angels announcer was made by first-year Angels radio play-by-play announcer Rory Markas.

“Fly ball to center field. Erstad says he’s got it. Erstad makes the catch! The Anaheim Angels are champions of baseball.”

Take a listen to it courtesy of a YouTube video & KLAC AM 570 radio.

If your like most Angel fans listening to Markas’ description of the final out that crowned the Angels 2002 World Champs gives you goosebumps and a war feeling inside.