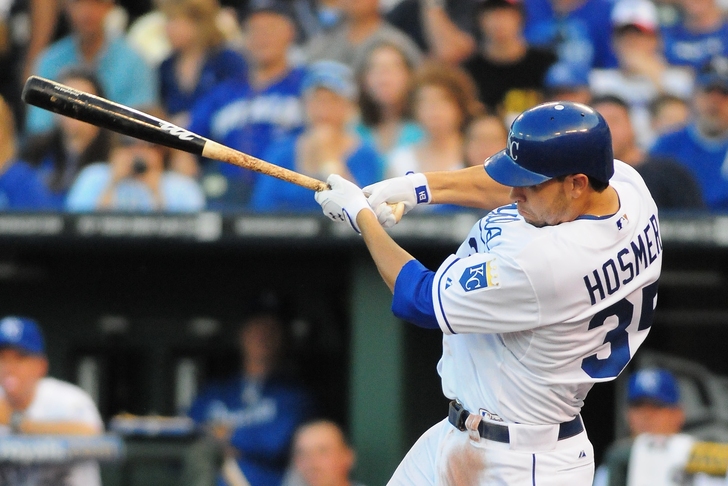 The Kansas City Royals have advanced to their first American League Championship Series in 29 years by virtue of 8-3 victory over the Los Angeles Angels on Sunday.

The Royals chased Angels starter CJ Wilson (.2 IP, 3 H, 3 ER, 1 BB, 1 K) with just two outs recorded in the 1st inning and never looked back, continuing to pummel the Angels en route to a 3-0 series sweep that set off an absolute flood of emotion in the stands and on the field at Kauffman Stadium.

Turning Point: The Royals had a paltry 95 home runs during the regular season, making them the only team in Major League Baseball this year not to reach triple-digit in longballs.

Someone forgot to give Kansas City's players the memo on this night.

Eric Hosmer and Mike Moustakas both hit their second home runs of the postseason in the 3rd and 4th innings respectively, doubling the Royals' lead from 3-1 to 6-2 in the process.

The Royals and their entire crowd would be forced to sweat out a couple of Angels threats, but very little would come of those thanks to some nifty tightrope work from starting pitcher James Shields (6 IP, 6 H, 2 ER, 2 BB, 6 K) and KC's 7-8-9 bullpen hydra of Kelvin Herrera, Wade Davis, and Greg Holland.

Royals Player of the Game: While Hosmer and Moustakas provided the major artillery, Kansas City left fielder Alex Gordon got things off and running for the Royals on Sunday.

After Mike Trout picked up his first hit and home run of the postseason in the top of the 1st (a gigantic solo shot), Gordon would provide a huge counterpunch - clearing the bases with a three-run double (he advanced to third on the throw) to give the Royals the lead to stay at 3-1. Gordon finished 1-for-4 on the night, but the one was a BIG one.

Angels Player of the Game: It's a three-way tie between CF Mike Trout, 1B Albert Pujols, and SS Erick Aybar. Trout and Pujols each provided Los Angeles with a solo home run (in the 1st and 4th respectively), and both have done everything humanly possible to help push these Angels out of the doldrums that they encountered in 2013.

Erick Aybar? He continued to emerge this year as a versatile threat both with the glove and with the bat. He went a perfect 4-for-4 with a double on the night, zeroing in on Kansas City pitching better than any Angel could all series long.

What’s Next? The Baltimore Orioles haven't been to the World Series since they won it all in 1983. The Kansas City Royals haven't been on the big stage since they took home the Commissioner's Trophy back in 1985.

One of these teams' luck is about to change. Game 1 of the ALCS begins on Friday in Baltimore with James Shields (14-8, 3.21) likely to take the ball (Yordano Ventura being another option) once again for the Royals (on four days' rest) against the Orioles' Chris Tillman (13-6, 3.34).