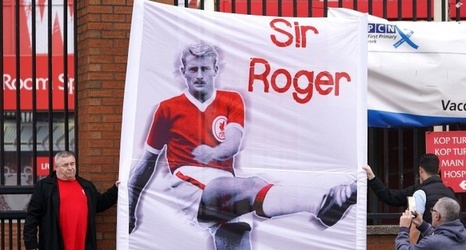 Liverpool fans have gathered outside Anfield ahead of the funeral of former England striker Roger Hunt.

Known as 'Sir Roger' to Reds fans, the club legend died at the age of 83 last month.

Hunt is the club's record league scorer with 244 goals and was part of England's 1966 World Cup-winning side.

His hearse will pause outside Anfield on its journey to Liverpool's Anglican Cathedral for a service which begins at 11:00 BST.

Reds manager Jurgen Klopp said Hunt "comes second to no-one in his importance in the history of Liverpool FC".