Relief for Liverpool fans! Virgil van Dijk reassures supporters he's okay after late injury scare which saw him clutching his ankle and limping off the pitch after the Netherlands' comfortable victory over Turkey 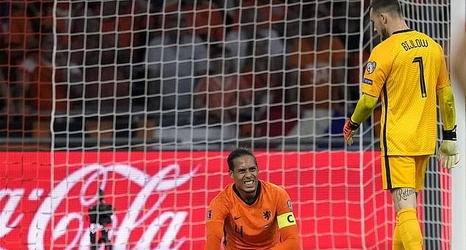 There was a heart in mouth moment for Liverpool fans when Virgil van Dijk was clutching his right ankle during the Netherlands' 6-1 victory over Turkey.

The 30-year-old who has only recently returned to action after a serious injury, looked in pain following a collision in the closing seconds of their 6-1 victory over Turkey after goalkeeper Justin Bijlow underhit a pass to him.

Van Dijk was able to get to his feet at the final whistle but limped off the pitch which would have been a moment of concern for Liverpool after the Dutchman missed ten months of action following his knee injury back in October.