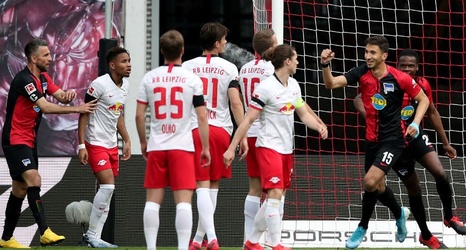 The Liverpool midfielder has started and finished each of his loan club’s three matches since the German season restarted earlier this month.

A smart, volleyed finish from Grujic helped Hertha claim a 2-2 draw at RB Leipzig in midweek - a result that followed convincing victories over Hoffenheim and Union Berlin for Bruno Labbadia’s team.

In-form Hertha’s next assignment sees them host Augsburg on Saturday and, ahead of that fixture, Liverpoolfc.com caught up with Grujic to discuss the adaption to a new way of working, his aims for the rest of the campaign, his hopes for Liverpool and more…

Marko, you have taken seven points from three games since the Bundesliga resumed – everyone at Hertha must be pleased with that?