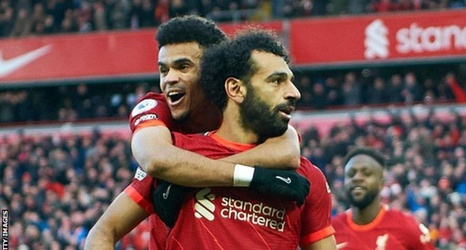 Luis Diaz may be 149 goals behind Mohamed Salah in a Liverpool shirt, but boss Jurgen Klopp hopes a similarly emphatic career lies ahead for his latest signing.

His dinked finish - crafted by a sublime Jordan Henderson pass - followed strikes from Sadio Mane and Salah, who reached a 150-goal milestone in 236 games for the club.

"No-one could have predicted when he scored the first goal at Watford, he could score 149 more in a short space of time," Klopp said as he lauded Salah afterwards.

"Hopefully Luis can use his first goal the same way.