Liverpool 4-0 Arsenal: Reds run riot as Sadio Mane, Diogo Jota, Mohamed Salah and Takumi Minamino crush the Gunners after a tense first half where Arteta and Klopp had a major bust-up on the Anfield touchline 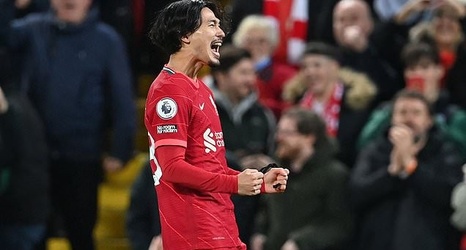 Liverpool thrashed Arsenal 4-0 in a scintillating performance which underlined their title challenge and provided the Gunners with a sobering reminder of the gap between the sides.

It was only 1-0 at the interval, Sadio Mane's looping header from Trent Alexander-Arnold's pinpoint free-kick the only difference between the sides in a fierce, frenetic encounter, the atmosphere heightened by the touchline scuffle between the furious Mikel Arteta and the unflinching Jurgen Klopp.

Diogo Jota's cool finish and Mohamed Salah's tap-in killed the game as a contest as the Reds front three ran riot, before substitute Takumi Minamino made it four with his first touch seconds after coming on.