Lineker and Ferdinand dispute penalty given against Lovren 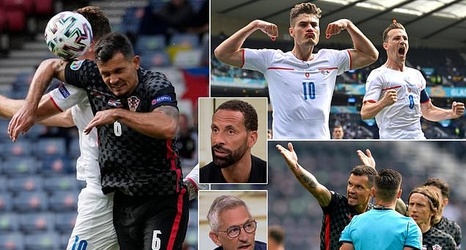 Gary Lineker and Rio Ferdinand were one of many people left incredulous by the decision to award Czech Republic a controversial penalty - despite Croatia's Dejan Lovren having elbowed Patrik Schick in the nose.

After a one-two from a corner, Jakub Jankto whipped in a cross and after the former Liverpool centre back jumped for the ball with Schick, the two-goal hero against Scotland crumpled to the ground.

Play continued before referee Carlos del Cerro Grande went to check on Schick as the Wolfsburg forward continue to lie down the Hampden Park turf.