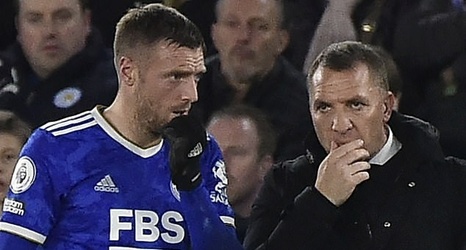 Leicester are reluctant to rush Jamie Vardy back from his hamstring injury despite their severe lack of options in attack.

The club’s top scorer is currently sidelined after playing through the pain barrier during the Foxes’ shock 1-0 win over Liverpool on December 28.

Vardy’s absence has left boss Brendan Rodgers without an orthodox striker, as Patson Daka is also injured and Kelechi Iheanacho has linked up with Nigeria for the Africa Cup of Nations, which starts on Sunday. Until Daka is back, Rodgers is likely to use Harvey Barnes or Ayoze Perez in attack.