Kostas Tsmikas 'making progress' on adapting to Jurgen Klopp's Liverpool tactics despite playing just FIVE MINUTES of Premier League football in his first season... but has 'struck up a friendship with Mohamed Salah' 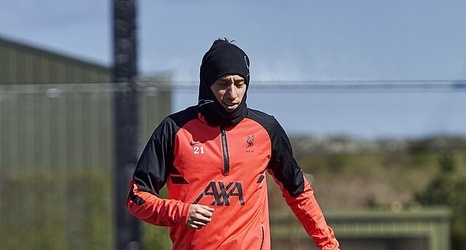 Liverpool's Kostas Tsimikas is 'making progress' at the club despite barely featuring this season under Jurgen Klopp.

The Greek international joined the Premier League champions last summer in an £11million move from Olympiacos. The left-back has not made much of an impact on the pitch since his arrival at Anfield.

Tsimikas has taken some time to adjust to Jurgen Klopp's expectations from his flying full-backs and, via the Athletic, admitted back in January: 'In the beginning, it was a little bit difficult to understand the way they play.

'But now, after a lot of months, I know exactly what the coach wants and the plan he has.