Jamie Carragher is in the stands as his teenage son James is carried off on a stretcher in just his third professional game... but Wigan boss Leam Richardson is hopeful knee injury is not as bad as first feared 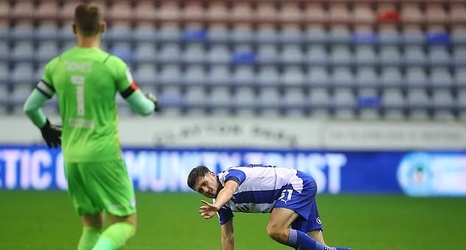 The 18-year-old required lengthy treatment following a 50-50 challenge in the first-half of the EFL Trophy game against Shrewsbury.

The defender was then carried off on a stretcher.

The Shropshire Star reported that Liverpool legend and Sky Sports pundit Jamie Carragher was in the crowd at the DW Stadium.

James Carragher started for Wigan Athletic in their final group game at home to Shrewsbury Town.