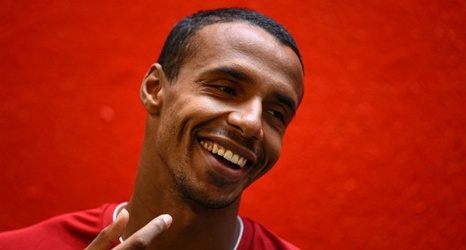 Joel Matip's eyes narrow. 'No, I haven't seen it,' comes his reply.

He is then handed a phone with the No Context Joel Matip Twitter account opened up on the display screen.

The centre-back spends the next minute or so scrolling. He laughs and laughs louder as he comes across another piece of content showcasing his unconventional manner.

The first Tweet from the account was a video that went viral. Although not on social media himself, Matip knows exactly which one it is.

After Liverpool won the UEFA Super Cup in Istanbul, the defender was inundated with messages about his celebration on the podium.