Finally some real competition for Liverpool! Sadio Mane and Naby Keita strike in 11v11 friendly at Anfield with stars in full home and away kits as they step up preparations for the Premier League's return 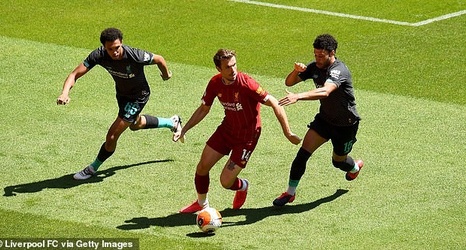 Liverpool have stepped up their preparations ahead of the restart of the Premier League this month after Jurgen Klopp put his stars up against each other in a short 11 versus 11 match at Anfield.

The idea of hosting training sessions inside stadiums to get used to the atmosphere and feel for an empty stadium has been mooted around the league but Liverpool pressed ahead with the concept on Monday afternoon.

Now, with the action in England's top flight set to resume on June 17, Liverpool are keen to pick up where they left off, considering they need two more wins to clinch their first ever Premier League title.