FAN VIEW: Rafa Benitez at Everton is a DISASTER waiting to happen. His Liverpool legacy and 'small club' jibe are a kick in the teeth, but his style and Chinese payday make him a NO GO... it could get ugly fast if Farhad Moshiri goes rogue 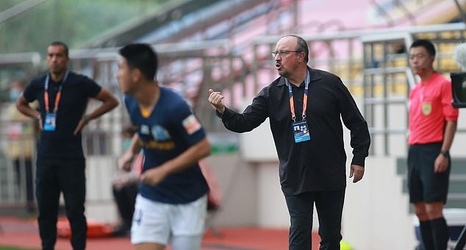 Imagine, just for a second, that your club chose to employ a manager who once described your team as 'small'.

Add to that, the man in question is entwined with your bitter city rivals and was at the helm for the arguably the greatest night in their history.

And, just to add salt to the wound, he arrives off the back of a lucrative spell in China, in which he pocketed a ridiculous amount of money, but achieved nothing.

That's the situation Everton fans could find themselves in after it emerged that Rafa Benitez, Liverpool legend and the architect of the Miracle in Istanbul, is on the verge of replacing Carlo Ancelotti at Goodison Park.