Fabinho looks set to miss Liverpool's crucial clash with Manchester City next weekend after pulling out of Brazil's national team squad for the November fixtures... with Everton midfielder Allan called up in his place 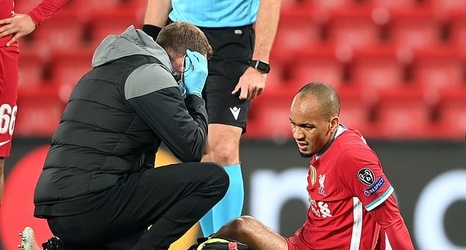 Fabinho has pulled out of Brazil's next's national team squad which almost certainly rules him out of Liverpool's Premier League clash with Manchester City next weekend.

The 27-year-old injured his thigh during the Reds' Champions League win over FC Midtjylland on Tuesday and was replaced by defender Rhys Williams in the first-half at Anfield.

The injury is a blow to Jurgen Klopp's side - who already have Virgil van Dijk out for most of this season with an ankle ligament problem - and Brazil have called up Everton midfielder Allan for their November fixtures in place of Fabinho.