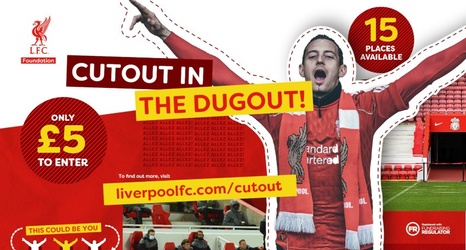 Liverpool FC is giving 15 lucky fans the chance to have their image featured on a seat next to the dugout at Anfield, while games continue to be played behind closed doors.

The Reds’ official charity, LFC Foundation, is offering supporters the opportunity to win a cutout of themselves to be placed in a seat at Anfield during home matches.

There are 15 places up for grabs next to the dugout area, with the personalised cutouts set to appear in seats at the clash with West Bromwich Albion scheduled for Boxing Day.

To take advantage of this unique opportunity, fans must enter the special raffle, which is £5 per entry and is open to all fans aged 18 or older worldwide*.