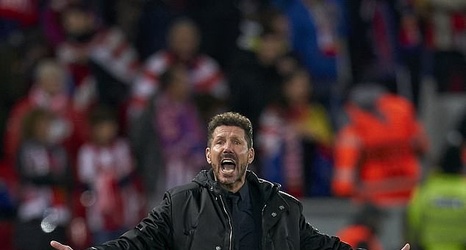 Diego Simeone had few complaints after Atletico Madrid were beaten 2-0 by Liverpool with Felipe sent off in the first half.

The Brazilian was shown a straight red card for deliberately tripping Sadio Mane in the 36th minute on Wednesday night.

‘The referee interpreted as a straight red,' Simeone said. 'At first I thought it was because he had not gone to the referee when he was called but the referee told me it was for the stamp from behind.’

Asked about his team’s fragile defence ruthlessly exposed by Liverpool’s opening goal Simeone added: ‘It’s precision from them as well.