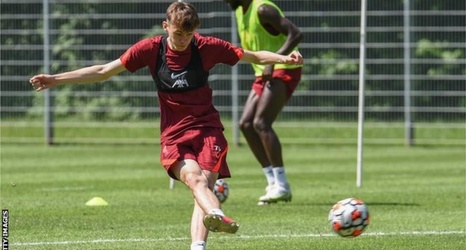 The 18-year-old joined the Premier League side from Dungannon Swifts in 2019 and has become a regular in the Academy set-up.

Bradley has been involved in Liverpool's pre-season camp in Austria and featured at right back in the Reds' friendly with Stuttgart.

He made his senior Northern Ireland debut against Malta in May.

Bradley spent most of last season with Barry Lewtas' Under-23s squad, scoring his first goal at Premier League 2 level against West Ham United in March, and also played in Marc Bridge-Wilkinson's U18s team which made it all the way to the FA Youth Cup final.