Carlo Ancelotti hints Gareth Bale could be involved in the Champions League final after being snubbed by the Liga champions for his Bernabeu farewell... and David Alaba 'is going to be there to play' against Liverpool 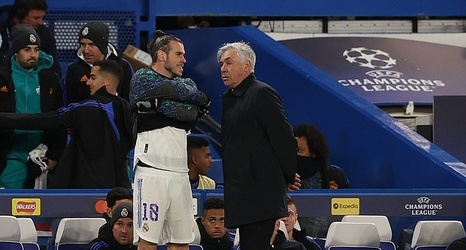 Gareth Bale could equal Cristiano Ronaldo's record of playing in five Champions League finals with a surprise role for Real Madrid against Liverpool in the showpiece, Carlo Ancelotti has hinted.

Bernabeu boss Ancelotti had called on Madrid fans to show Bale their respect in the Liga champions' final home game of the season on Friday, only to leave the Wales talisman out of his 23-man matchday squad for the goalless draw with Real Betis.

Despite only featuring for a solitary 16-minute appearance in Madrid's last 14 matches, Ancelotti suggested after the Liga closer that out-of-contract Bale could target history in the Champions League on May 28.