Can Liverpool stun Europe again? Zidane says Madrid are heading to Anfield at their 'physical LIMIT', while Trent's late winner has Reds' morale soaring... and Real are staying at the Titanic Hotel on anniversary of the ship sinking! 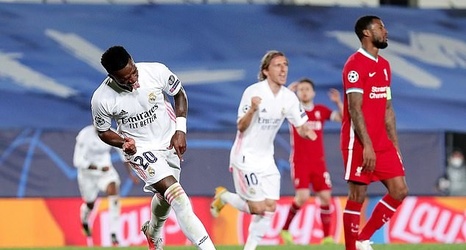 Liverpool will have to defy the odds once again in Europe on Wednesday night if they want to secure their passage to the Champions League semi-finals.

Jurgen Klopp's side are on the brink of crashing out of Europe following a tame 3-1 defeat to Real Madrid in the first leg of the quarter-final tie in the Spanish capital last week.

Vinicius Junior and Marco Asensio were on the scoresheet for Los Blancos as they put one foot in the semi-finals. But Madrid will know that Liverpool have been here before, most recently when they stunned Barcelona at Anfield after a 3-0 deficit from the first leg at the Nou Camp two years ago.