Antoine Griezmann receives his first Champions League red card for high foot on Roberto Firmino... after Atletico Madrid forward had scored twice to bring his side level against Liverpool 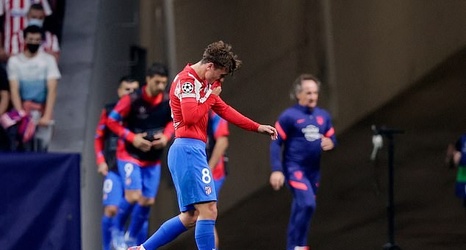 Antoine Griezmann went from Atletico Madrid hero to zero after receiving a straight red card against Liverpool for a high foot on Roberto Firmino.

The 30-year-old had scored twice for Diego Simeone's men to bring them back on level terms after Liverpool's early blitz at the Wanda Metropolitano.

But after an excellent first half, the on-loan Barcelona man was given his marching orders for the first time in the Champions League by referee Daniel Siebert eight minutes into the second half.

The France international was trying to gain possession and lifted his foot into the air to try to do so, but only managed to catch the Brazilian flush in the face.