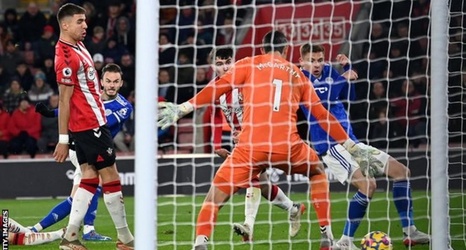 James Maddison scored for a third successive game as Leicester City twice came from behind to earn a Premier League point against Southampton at St Mary's.

The better side in the first half, Saints were rewarded for their positive start with a third-minute opener as defender Jan Bednarek reacted quickest when Mohammed Salisu's shot was saved after a corner.

Following a lengthy delay caused by a medical emergency in the stands, Leicester restored parity once more four minutes after the restart through Maddison - the midfielder cutting back onto his right foot and finishing neatly into the bottom corner.