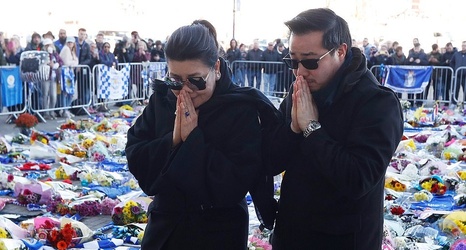 The bereft family of Leicester City's billionaire owner sobbed and clung to one another today as they came to the scene of the helicopter crash that killed him and four others.

Vichai Srivaddhanaprabha's wife Aimon and his heir Aiyawatt, who regularly flew with him, were among the mourners who flew to the Midlands from Thailand to lay a wreath outside the King Power Stadium.

Mother and son were in tears as they stood surrounded by the flowers, football shirts and scarves left by thousands of supporters at a growing shrine for the duty free mogul who died 48 hours ago.