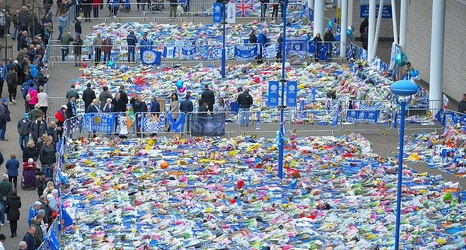 Leicester City striker Jamie Vardy and wife Rebekah were seen weeping today as they visited the memorial left to club owner Vichai Srivaddhanaprabha by heartbroken fans following his death in a helicopter crash.

The 60-year-old Thai billionaire was among five people killed in the disaster shortly after the aircraft took off from the King Power Stadium on Saturday evening.

Leicester midfielder Daniel Amartey was the latest player to lay tributes outside the stadium this morning.

The football club opened a book of condolence at the stadium this morning and there has been a steady stream of supporters arriving since the early hours.